The Ultimate Zero Energy Now Home is proof that combining high performance and market appeal is a recipe for success in today’s competitive production environment.
November 30, 2020 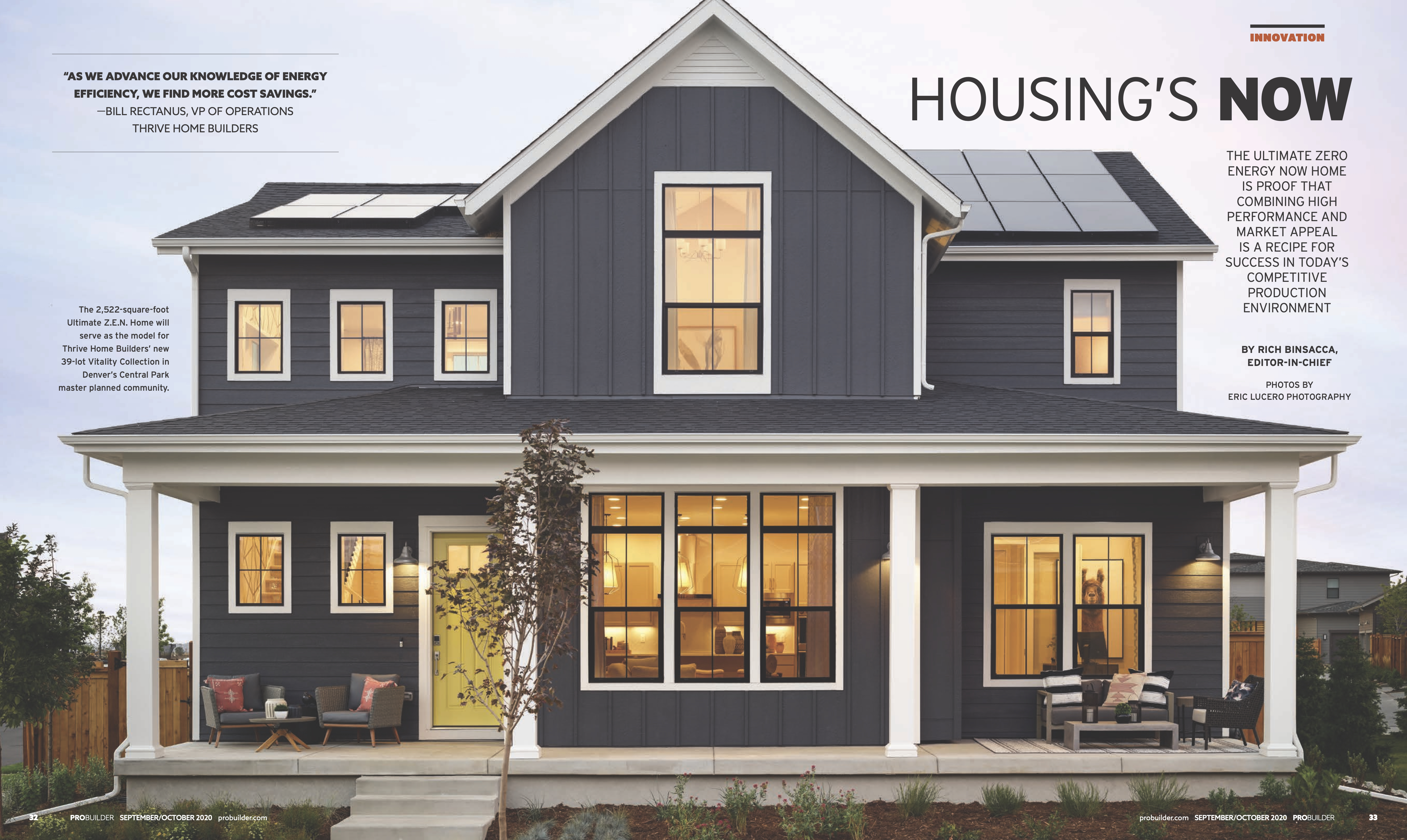 Here’s the secret to building market-savvy, energy-efficient, healthy, and comfortable homes with a net-zero balance at a competitive price point across multiple lots: There is no secret.

The tools are already there, and so are the skills, with off-the-shelf products you get through your normal supply chain installed by your current subs; a wealth of building science and proven best practices; and sales and marketing messages that resonate with an increasingly interested and motivated pool of buyers. The code has been cracked.

HOW DO YOU SELL NET ZERO? Or deliver a healthy home, incorporate battery storage, or go all-electric? Find out from the project team and industry experts through a series of four live webinars scheduled for Oct. 14, 19, 21, and 28. To register and participate, please go to eeba.org

The third iteration, the Ultimate Z.E.N. Home, is the model for Thrive’s final entry in Central Park: a 39-unit single-family collection called Vitality, which is the culmination of the company’s long-standing efforts to deliver high performance, market appeal, and competitive pricing in the same product. “It was an opportunity to have an impactful swan song in this development,” says Thrive COO Stephen Myers. “We wanted to get it as good as we possibly could.”

The Ultimate Z.E.N. Home is a collaboration of Thrive Home Builders, the Energy & Environmental Building Alliance (EEBA), and Pro Builder.

For more information about the project, including construction progress photos and videos, go to pbultimatezen.com

Building a low-load, healthy home is nothing new for Thrive. A devoted follower and advocate of the U.S. Department of Energy’s Net Zero Ready Homes and the Environmental Protection Agency’s Indoor airPLUS programs, both of which were applied here, the 191-unit, $87 million builder cultivates a culture, including its trade partners and suppliers, to meet those standards, and has earned a reputation among buyers and landowners for delivering on them.

“Lots of builders are content to do no more than whatever is required, but that’s not the expectation here,” Myers says. In an MSA saturated with national players such as Lennar, Century Communities, Meritage Homes, and D.R. Horton, to name a few, Thrive needs a different message to not only compete for buyers, but also for land (see “A Leg Up on Land,” below). “We just can’t afford to do the same thing as everybody else.”

As much as Thrive differentiates and prides itself on the energy efficiency and health of its homes, the Ultimate Z.E.N. Home presented an opportunity to better align Thrive’s floor plans with other local builders serving the move-up market.

The most obvious upgrade was including en suite bathrooms for all bedrooms, not just the primary suite. The plans also provide a bit of volume in the primary bedroom and bath, along with an extended walk-in closet.

In addition, there’s a ground-floor study, a dedicated and generous drop zone and pantry from a three-car garage, an upstairs loft, and an optional keypad-secured package delivery closet tucked into the front porch (see “A Fresh Floor Plan,” below).

All that and more is wrapped in a traditional farmhouse style that also aligns with buyer expectations, striking the balance with high performance Thrive sought to achieve.

While the previous Z.E.N. series of homes was successful in terms of sales, those homes never quite realized that equilibrium, says Eric Sung, Thrive’s design director. “The first Z.E.N. product wasn’t as good-looking as it could have been, and 2.0 pushed the architecture a little too far,” with modern forms, more complicated footprints, and a broader mix of exterior materials.

Instead of simply tweaking an existing farmhouse plan for the next iteration, Thrive turned to longtime collaborator Seth Hart, of DTJ Design, in nearby Boulder, Colo., to develop something fresh but also timeless. “We needed to step back and get an outside voice to deliver something that would outlast trends,” Sung says.

The result is a plan with a pair of well-proportioned farmhouse-style elevations designed to attract mainstream move-up attention. “When you know what you want from a floor plan, you usually get the best elevation,” says Hart, who translated Thrive’s wish list to his sketch pad. “Every floor plan decision had the elevation in mind.”

A Leg Up on Land

Since launching its first Zero Energy Now (Z.E.N.) series of homes in 2014, Thrive Home Builders has proven that extreme energy efficiency and a dedication to indoor health sells. But the reputation and trust the company has cultivated with buyers has also attracted the attention of landowners and developers.

“Land is competitive just about everywhere, and especially here in Denver,” says Thrive COO Stephen Myers. A lot of developers and municipalities have sustainability goals for new master plans and communities, he adds. “Our brand makes us unique at that stage of the game and opens doors to us that wouldn’t be open for a typical builder of our size.”

It’s one way Myers answers questions from other builders about whether Thrive “gets paid” for going so far above and beyond code-minimum standards for performance. “Are we profitable? Yes,” he says. But then he usually flips the question around. “I ask, ‘Are you getting paid for building the same thing as everyone else?’”

Myers acknowledges there’s a level of safety in the herd mentality, but he doesn’t buy into it. “With such a big presence of national players in Denver, we need a different message,” he points out. “Our brand gives land sellers, developers, and cities a reason to call us.”

Not only are Hart’s homes easy on the eyes from the curb and vibrant on the inside, their simpler forms allowed Thrive to wring out costs from the previous iteration of the series. “If we were going to redesign the product, we needed to do it in a way that would reduce costs,” says Bill Rectanus, Thrive’s VP of operations.

Gone are the high-cost/low-value juts and jogs of the 2.0 series’ foundations, along with cantilevers and masonry and stone accents. “The new plan also stacks the house better,” Rectanus says, making MEP runs and structural components more efficient to build.

And while Thrive is dedicated to balanced fresh-air ventilation to achieve its healthy home objectives, the builder found a cost-efficient alternative to its previous energy recovery ventilator (ERV) spec: a standalone, on-demand, filtering supply-air fan and continuous exhaust air unit that delivers the same (or perhaps better) results for far less money and maintenance.

The common, easily found components of that scheme not only lowered materials costs and reduced supply chain issues compared with an ERV, but were also more familiar to Thrive’s trade partners, so they could install them quickly and properly, reducing labor costs. “As we advance our knowledge of energy efficiency, we find more savings,” Rectanus says. As a bonus, the supply fan features a carbon-activated MERV-8 filter to combat Denver’s ozone issues and to ensure fresh air intake.

You see what Thrive did there? It improved the market appeal of its product while simultaneously reducing material and labor costs and hitting aggressive performance targets. “It’s like the Tesla of homes,” says Aaron Smith, CEO of the Energy & Environmental Building Alliance (EEBA), a co-producer of the Ultimate Z.E.N. Home with Pro Builder. “It’s incredible design combined with high performance that kicks everyone else’s butt.”

As a validation of that effort, Thrive sold out phase one at Vitality—a total of 13 available lots—within a month of opening, even without a model during the first two weeks.

Best of all, the Ultimate Z.E.N. Home isn’t a bait-and-switch; almost everything in it is standard for its $718,900 base price (boosted $20,000 after phase one)—including its 7.8 kWh rooftop solar array and in-home battery storage—across all 39 units in the new Vitality series, including 16 of this model.

A slightly smaller and less expensive plan with the same features and spec list is available in either a Colonial or Craftsman elevation, which helps to create diverse, attractive streetscapes.

“We want to show people that net zero can be done in a competitive production environment,” Rectanus says. “The future of housing is to build like this.” And that future is now.

Thrive Home Builders built the Ultimate Z.E.N. Home during a global pandemic, keeping to its schedule while adhering to social distancing and cleanliness protocols on the jobsite and overcoming some supply-chain challenges.

The experience also encouraged the builder to push its healthy home commitment even further, resulting in a selection of optional “clean home” upgrades that will enable Thrive to test market demand and perhaps weave these into its list of standard features.

The new “Health Packages” offer touchless faucets, water filtration, a humidifier tied into the integrated indoor comfort system, and an active, real-time radon monitoring system (supplementing an active radon mitigation system already included in the home’s price). “All of these products are readily available in the market and are familiar to our trades and suppliers,” which keeps costs in check, says Bill Rectanus, Thrive’s VP of operations. “We vetted these products, just like everything else we put into our homes.”

Thrive will test the packages across all of its actively selling communities in Central Park for a year before deciding what components (if any) to include as standard features in its next new series of homes. Already, one buyer of the builder’s townhouse product has opted in.